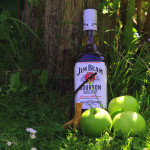 I’ve wanted to try this Apple Pie Bourbon recipe from Boozed and Infused for a while now.  So I headed to the shops and got myself some Bourbon and a few other bits for the recipe.

A vanilla pod, some cinnamon sticks and some green apples.  A pretty easy and very tasty sounding infusion.

As per most of my infusions, this one will take a good few weeks, so I won’t post the recipe until it’s finished – just in case I need to tweak it at all.  I found with the bourbon infusions I’ve done before that I needed to add a little sugar syrup at the end, which I guess you could call cheating when it comes to infusions, but I quite like adding the sweetness.

I appreciate this made them more of a liqueur rather than an infusion but this made them much easier to drink and really brought out the flavour of the spices I used.  Just a little sugar syrup really made a big difference.  I didn’t add much at all, maybe an amount equivalent to 5-10% of the infused liquid to begin with.  It really did make a big difference and among friends the bottle definitely didn’t last long.

I was also using pretty dirt cheap bourbon then – hopefully with a slightly better quality one and more natural sugar from the apples, perhaps this one will be pretty good to go straight after the infusion.

Whilst I was away on my ski season, we had a go at a few bourbon infusions.  We never did an apple pie bourbon, but we did try some similar ones and they all tasted pretty damned good – especially when mixed with coke on the rocks!  I credit the infusions for my being able to drink whiskey and bourbon once again.  Why I couldn’t is another story, and probably not one for such a public forum..!

I’m really looking forward to trying this one out.  Now I just need to be patient whilst the jars sit in the cupboard for the next few weeks and everything infuses!