This is a tale of an experiment not working out.  Of failure and learning.  It’ll go better next time – but before then, I thought I’d share with you why I thought this time it didn’t go so well! 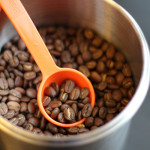 I thought I’d try a coffee and orange bourbon.  I had some bourbon lying around which we brought back from a recent trip.  I also had some coffee beans I’d bought from the local supermarket whilst I waited for my new Pact subscription to kick in.  No surprise that supermarket coffee is a notch above dirt in the taste department when compared to decent, fresh roasted coffee.  I thought rather than throw them away, I could use them for an infusion.  Add in some orange zest for good measure, and I thought I was on to a winner.

So, I threw all the ingredients together into a large air tight jar and let the infusion begin.  I used quite a high ratio of coffee to bourbon, on the higher end of that suggested at Northwest Edible Life.

The signs were promising

After a couple of days, I gave the infusion a little smell to see how things were coming along.  The smell was actually pretty promising.  Quite a bitter kick to it, but a nice blend of orange and coffee.  It smelled promising.

After another few days, the bourbon was very dark and the smell quite strong.  Essentially the coffee had been brewing in a solvent (bourbon) for almost a week – I thought it was about time to filter and test.

Yikes.  This is the word that sprang to mind when I tested a teaspoon of the stuff.  Sharp, strong and bitter, the infusion wasn’t as good as the occasional whiff had promised.  An hour later, and I can still taste the bitterness in my mouth (and the orange taste slightly, which is promising for future).  The coffee had overpowered the infusion hugely.

After standing and contemplating the potential of adding a dramatic amount of orange sugar syrup and creating a liqueur for all of about 30 seconds it was quickly decided this was a losing battle, so it got thrown (especially considering the likely amount of caffeine in the infusion).  But not before I’d contemplated some lessons from this experiment.

I’ve come up with a few hypotheses as to why this infusion failed.  I will try again, taking some of these into account.  I work in digital marketing so test and learn is what I do, after all!

Unfortunately this time there are no taste reviews and pretty pictures of the final product somewhere in the garden looking nice.  The photo credits go to the blog Rooster and Wheat on this post.

Don’t try this at home folks.  I can assure you that on this occasion the continued bitter aftertaste in your mouth and the imminent caffeine headache I currently have just isn’t worth it.  I’ll be back with an improved and tasty version.  In the meantime, here’s to hoping I get some sleep tonight!